That's me, totally loving my surf board. I was walking past it and I couldn't resist giving it a big 'ole hug.
It's brought me so far in the last year or so. It's provided me with a dream come true - riding the waves - standing up (!) - and I'm sure inspired me in my latest adventure-to-be.

Ashton will be in pre-school, Trin will be...we don't know yet what Trin will be doing...and I will be studying for a Masters Degree in counselling psychology with a specialization in treating trauma.

I started surfing because after years of training in other people's versions of personal transformation, I wanted to pursue my own version. I wanted to become something - someone - I never thought I could be.

On the one hand, I had hoped surfing would turn me into someone completely different. Someone who never gets upset about the small stuff. Someone who never yells at the kids, or gets completely worked up when things don't go her way. I thought it would erase all the things I couldn't stand about myself and make me totally mellow and super "cool." It didn't do that.

But surfing has provided me with more joy than I've known in a long time. It has restored me to myself and made me more of myself than I can remember being. It's made me young again in some ways and also grown me up. And it's made me more capable of dealing with the things that really matter.

I'm so glad I'm doing it. It's one of the great love stories of my life.
Posted by Jesica Davis at 6:42 PM 2 comments: 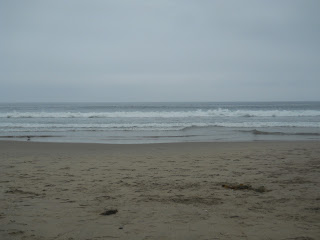 1) Friday afternoon I arrived in Santa Monica at around 3 o'clock. The sun was brilliant (a theme in this blog),  the air was warm. And, I realized, the water probably was too, after this week's crazy mid-October heat wave. By that time, I was already on the beach but I stripped off my wet suit and - inspired by a cute bikini-clad mermaid in the waves -  went into the water with only my bathing suit. No rash  guard. No board shorts.  A first.

2) The water was unusually flat, but the afternoon sun sparkled brilliantly on the surface. It was glittery and gorgeous. There were few waves but there sure was a lot of beauty. When I saw the water level drop and rise to announce an approaching wave, I paddled like hell. It was a miss but the water was warm and I didn't mind getting dunked. I climbed back on my board and blissfully stared out at the beautiful vista, considering myself very blessed. I smiled at the lone surfer on my right who was looking straight at me.

Then I saw it. After he did, apparently.

My right breast. Glistening in the sun. There's a reason why girls like me should wear rash guards.

3) I saw something else, too. A strange cloud in the distance. Like smoke from a fire rising up from the horizon. I watched as it approached and eventually enveloped and surpassed me. It was fog. What had been a sunny day turned gray and cool within minutes, all while I sat on my board. When I turned around, I couldn't even see the guard tower thirty yards away. I had never seen that before.

Another first.
Posted by Jesica Davis at 6:00 PM No comments:

Email ThisBlogThis!Share to TwitterShare to FacebookShare to Pinterest
Labels: surfing 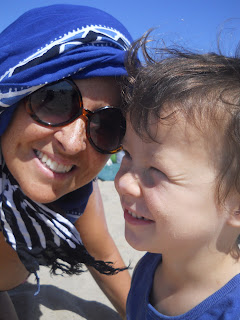 Because I was tired.

Every night I put my kids to bed. And every night, around four a.m., Ashton crawls into my bed and kicks me. It's not an aggressive kind of kicking, just a continual thrusting motion with his legs. He also grabs at my breasts and generally gets all over, under and to the side of me. Trinity sometimes gets in bed with us too. She doesn't kick. But she scratches and it makes a hollow fingernails-on-a-drum-head sound that is maddening.

One thing I've noticed about mothers is that we often feel tired but don't understand why. And then we feel guilty because we don't feel like doing the things we told people we would do. Or  because we have a hard time getting going in the morning. Or because it took us two hours to get the kids out of the house and into the car, when it shouldn't have been such a big deal.

But those nearly invisible sources of exhaustion add up and whittle away at our energy levels and our executive functions.

So I slept in this morning and enjoyed the sensation of being touched by no one, kicked by no one, and interrupted by no one. Even with the giant pee stain Ashton left in my mattress after wetting the bed at 5 this morning.
Posted by Jesica Davis at 11:42 AM No comments: 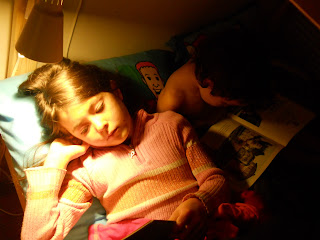 There's a lot of talk about courage in my family right now.

Yesterday, Brian and I went to see a movie called "Finding Joe" which explores the ideas contained within Joseph Campbell's "Hero's Journey." To be a hero, of course, one must have courage. But what is courage?

For Brian, it has required courage to be a father. Being a father was something he thought he could never, probably would never, do. Still he does it and the very attempt is making him a hero.

For Trinity, right now, it requires courage to take her daily dose of Chinese herbs - herbs which, we are told, have a very good chance of making her well. She told me today  that it will also require courage for her to be well, because being "sick" (with severe chronic eczema and allergies) is all she has ever known. For her to be well will require her to be a hero.

But what requires even more courage than surfing is being broke. My adult life has been a twenty-year roller coaster between heights of adequacy (sometimes abundance) and depths of scarcity. In the past, I would always take the lean times as a sign that I was on the wrong path. So, along with being strapped, during these periods I would also undertake a frantic search for something I should be doing differently.

For the first time in my life I am able to say, without doubt, that I am not on the wrong path. But I'm/we're broke again, anyway. So I'm standing in a new space, saying to myself that "just because the money isn't there, that doesn't mean I'm doing the wrong thing."

For me, THAT is courage. And I believe it will make me a hero. At least to myself.
Posted by Jesica Davis at 5:40 PM No comments:

Jesica Davis
Jesica Davis is a bona fide tarot card reader and an experienced personal coach. She holds an M.A. in the History of Religion from The University of Chicago Divinity School.